If you follow the Republican presidential campaign, you have undoubtedly noticed that the candidates are trying to sell you a story about how horrible the economy is and why you need to elect them to fix it. I think they are dead wrong, the economy is great. Here’s why. 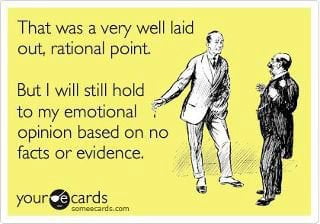 One measure of economic health is corporate profits. If you look at recent earnings releases for S&P 500 stocks, you will see mostly good news. Companies are not just making money, they are achieving record profits. Even General Motors, one of the companies that almost did not survive the Bush recession, just posted a record $7.6 billion profit.

If you don’t know what record profits means, here is a quick business lesson. Companies have multiple financial statements that explain their financial health. The income statement explains the company’s revenue and expenses during a period of time. If they earned more than they spent, they had a profit. If they have bigger profits than ever before, they are doing really well. If lots of companies are doing really well, the economy must be good.

True, things are not as rosy as the low 4% unemployment rate in 2000, but according to the macroeconomic theory called the “natural rate of unemployment,” that might have been deceivingly low or an anomaly. Compared with other developed countries, particularly around Europe, an 8% unemployment rate is average.

Another telling sign is that the unemployment rate varies by education. Someone without a high school diploma is facing a 13% unemployment rate while people with a college degree only have a 4% unemployment rate. Just because some people are not educated and can’t find a job does not mean the economy is bad, does it? It means they need to go back to school to compete in a global economy.

Yesterday, the Dow Jones Industrial Average, a top indicator of financial market health, reached the highest level since 2008. The Dow went over 13,000 points. That is a good sign. My personal portfolio noticed the great market conditions as well.

Things Are Not That Gloomy

Simply put, the economy is not as bad as people are saying. Yes, it is not the high flying dot com boom. Yes, many manufacturing jobs have moved out of the United States, but they are not going to come back. It is time that we look at the new world of employment for people with strong education backgrounds.

I have friends getting raises and new jobs all the time. That is not because no one is hiring. I have friends buying homes and getting bonuses. We are making lots of money in the stock market. We are able to go to restaurants and bars. It takes hard work, but people are doing well.

What do you think? How is the economy doing for you? Please share your thoughts in the comments.

29 thoughts on “What Recession? The Economy is Awesome”