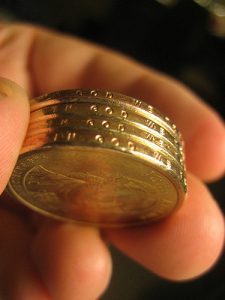 When most people in the United States think of a dollar, they think of the famous one dollar bill. The dollar bill has a long history and most Americans have never even considered the demise of the common currency. However, the dollar bill is threatened with extinction.

What could possibly threaten our beloved greenback? Its rounder, heavier, metal counterpart: the dollar coin.

A $1 bill costs the United States government 2.7 cents to produce and the average lifespan of a $1 bill is 40 months. The cost to mint a $1 coin is 15 cents. The big difference is that a typical coin lasts 34 years in circulation.

A report released last month by the Government Accounting Office, or GAO, tells members of Congress that moving to $1 coins would save the United States government $5.5 billion over thirty years (net present value). That is an average savings of $184 million per year.

I am sure the notion of moving from $1 bills to $1 coins brings up mixed feelings. Government savings aside, most American consumers prefer to have a thin, lightweight dollar bill in their wallet to a pocket full of coins. When I go to the light rail here in Denver, I am given $1 coins as change for my ticket. I recently bought a $2.50 ticket with a $20 bill an enjoyed an evening of clanking change in my pocket until I was able to unload them on an unsuspecting bartender.

However, I do support the change. In an era where Republican legislative members are cutting NPR funding, a major national service, to “save money,” we have to look at ways to save money across the board. Changing our currency may be a slight inconvenience for some people, but it does not cut any services from the public.

Time to Get Real

If you have ever traveled the world, you know that most other countries start their paper currencies at a level closer to the $5 range (depending on conversion rate). That saves those countries money and their citizens do not complain about the low denomination coins.

A sensitivity analysis shows that the transition could save $4.5 billion to $8.9 billion depending on the replacement rate. That is nothing to push off for convenience’s sake. When we are faced with government worker layoffs, we need to put all options on the table. This one is a no brainer.

What do you think? Would you be sad to see the $1 bill go? Please give your thoughts in the comments.

4 thoughts on “Cash or Coin: 5.5 Billion Reasons to Ditch the Dollar Bill”