Time Magazine released an article last month titled, “Americans Are Taking on Debt at Scary High Rates,” and I couldn’t agree more. It was probably about a year ago that I realized the shift was happening. People were no longer talking about how they were coupon clipping or saving money on gas. Nope, the shift had happened. It was 5 years since the infamous downturn and it seemed like people were starting to forget. Saving money was no longer cool and the shiny car was again a strongly desired product for many. Now, in 2015, the media was beginning to notice as well.

In reviewing the data, non-housing debt has actually been on the rise since 2011. More specifically, student loan debt and auto loan debt have been the loans of choice for the past few years, as more and more people borrowed money for college and for that new hot ride after graduation. In my opinion, both of these debts are completely unnecessary.

How to Avoid Student Loan Debt

I have talked to quite a large number of folks about student loan debt over the years, and for those that borrowed much, the reasoning always sounded the same. When these students were entering college, they knew that they would not have the money to pay for their education and were therefore already doomed into debt by way of student loans. Once this realization happened, taking on more debt was no longer a difficult choice. In fact, it became a normal way of life and was not hardly thought of throughout their college years.

Debt was thought of as a tool to get the education needed in order to succeed in the world. And, when debt becomes a tool it no longer carries a bad stigma and is therefore much easier to borrow. Students that had this mindset regarding debt often left with $50,000 or more by way of student loans. Only after graduation did they realize how this loan would negatively impact their future.

It is a personal passion of mine to keep kids from going into student loan debt, and with the correct mindset I believe it is certainly possible for many students to achieve. With just four key actions, students could graduate completely debt free:

It absolutely floors me when I talk to kids that have not applied for any scholarships whatsoever. Either they think that debt is a necessary tool for college or they think they’re not smart enough to get scholarships. But, neither of these thoughts should even be entertained! Scholarships can be won by almost anyone. Just ask Kristina Ellis, who has won over $500,000 worth of scholarships in her lifetime, and she wasn’t the glowing straight-‘A’ student that you might think she was. Her tips? Get involved in community service (to boost your resume) and seek out local scholarships over the mammoth ones that thousands apply for. By simply applying for scholarships, many students could more easily avoid student loan debt.

The second best way to avoid college loans is by actually working during school. Sure, your grades might slip from an A- to a B+, but by working 30 hours per week and working a full-time job in the summer time, many of your debts could be covered by your own two hands! Work hard throughout your college years and enjoy a debt free life for many years afterward.

For many students, their mom and dad are often happy to host them while they’re taking college courses. It may not be a great spot to throw those college parties that you’ve been dreaming of, but there will always be friends that live on campus if you really want to experience the college life. Avoid on campus housing and you could save yourself $10,000 a year or more, which will definitely help you avoid student loan debt!

If you decide to live at home, eating cheaply is easy! But, if you desperately want to live on your own then you will need to learn how to eat inexpensively. Of course, there’s Ramon noodles, but this won’t help your brain-power much since the nutrients are lacking. Instead, choose eggs, bread, tuna, beans, frozen corn, bananas, and carrots. While I wouldn’t recommend eating all of those together, they are tasty cheap staples to include in your diet.

How to Avoid Auto Loan Debt

This one is simple. To avoid auto loan debt, keep driving the car that you had in college. Done. Seriously though, why is it that so many students need to reward themselves with a new car after they graduate? Sure, it’s great that you got your degree, but we all know that a degree does not guarantee that you’ll get a job, and it certainly doesn’t guarantee that you’ll keep one, so why is it that we’re tacking $20,000 onto the average student loan debt of $30,000? For those that do this, I think they probably should have taken an extra class while in college called, “Common Sense 101”.

If you are worried about what people might think of your crappy college car, don’t. I honestly have more respect for those that live with their parents and drive around their beater car than those that are trying to put on a show with their upscale apartment and new car, all while obviously drowning in debt!

Consider Where You’ll Be With No Debt

The average college grad has about $30k in student loan debts. If they take out a loan for their car, then they typically add at least $20k to that, which rounds out their debts to about $50,000. If they earn $30,000 (after tax) and have yearly expenses of $20,000 (which is living pretty cheap), it will take these average students at least five years to claw their way out of debt!

What if you graduated with no debt?

In those five years where your friends are trying to get back to a net worth of zero, you could be building yours exponentially. With $10,000 a year of disposable income, if you choose to invest that money and could earn 10% interest, your net worth would build to $83,000 at about they time they get up to $0.00. And, if you left that money alone until your retirement years, guess how much it would be worth? $2,300,000! Yeah, I’d say that would be worth staying out of debt in your younger years, don’t you? 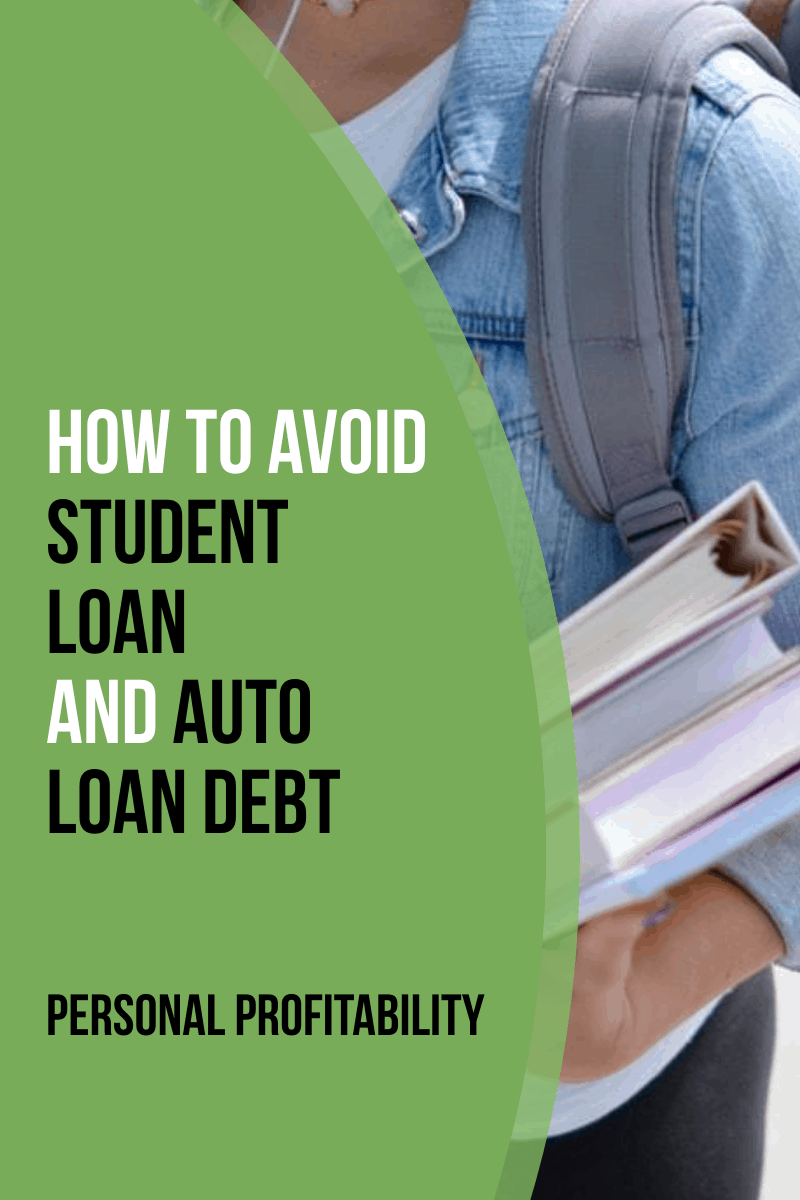 Derek is a staff writer at Personal Profitability and the owner of LifeandMyFinances.com, where he shares what he learned after paying off over $70,000 of debt.