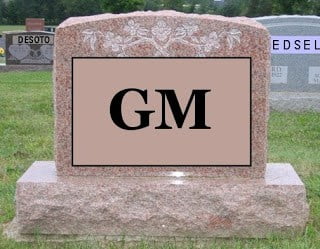 American cars suck. That is the short reason. American car companies are bad at business, that is the longer reason.
The United States government failed to pass a $14 billion bailout to United States car manufacturers. There are many reasons why the “Big 3”, Ford, GM, and Chrysler, are not doing so well today. Here is my take on the whole thing.
I have a Toyota. My family has owned 3 Toyota cars over the years, and each has been great. They are safe, reliable, fuel efficient (my Corolla gets over 30 miles per gallon), and take relatively low maintenance.
We once owned a Ford. It was in the shop almost monthly, did not get great gas mileage, and was an overall pain in the ass. People who have Hondas and Toyotas are generally happier with their cars than people who have an American car. (Some “foreign cars” are now manufactured in the US, by the way)
The American car dynasties made several big mistakes. The built cars that sucked, they built cars that were not going to do well in the long run, and they did not run a good business model. If a company sucks at making money, they should close. The government should not pay to keep them going with my tax money. My taxes don’t subsidize Google because they make money. My taxes don’t subsidize McDonald’s because they make money. My taxes don’t subsidize WalMart because they make money. If they stop doing that, then they should close.
My advice to the Big 3: If you want to stay in business, run your business to make money.

Do you have any complaints for American car companies? Do you think the bailout was a good idea? Tell me what you think in the comments.