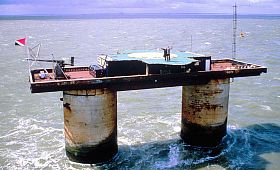 I have been fascinated by the nation of Sealand since I heard of it a few years back. Officially the Principality of Sealand, this country is an unrecognized nation off of the coast of the United Kingdom.

The nation is listed as 500 square meters in size and the entire area of the nation is on a permanent military outpost that looks like an oceanic oil platform. The nation has a monarchy, currency, postage stamps, and passports. They even went to war with Germany and won!
The economy of the little country is based on offshore web hosting. It looks like they are going to host a large online gambling site in the near future.
For a little entertainment and education head to their official website and read their online newspaper. If you can handle the controversy, you can even see the website of the “government in exile”.
Share
Share
Pin
Tweet
More