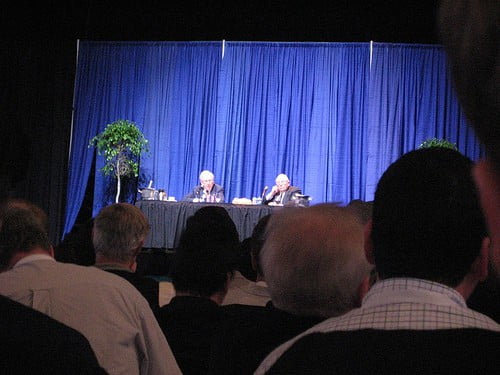 It is no secret to Narrow Bridge readers that I am a fan of Warren Buffet. His investing strategies have helped him grow investments from family and friends in Omaha into the company with the seventh largest revenue in the United States. As the debate moves forward on dealing with United States debt, the second richest American has voiced strong opinions on how to fix the problem.

I have long been an advocate of social programs such as social security and universal healthcare. I enjoy driving on freshly paved highways and hate the two lane highway that should be at least double the size that I take to work every day. I enjoy the fresh air and clean water protected by the EPA. I like going to public firework shows on the fourth of July. I am glad impoverished Americans can access Medicaid and can visit a doctor when they are sick. I am thrilled that every young American can access a free education, though I wish many were better and that the education lasted through college.

Of course, many could be managed better. The wasteful spending at some organizations, like the military and IRS, could be fixed. If run more effectively, the military could have the same power and effectiveness at a lower cost. The IRS could require electronic filing and save millions, if not billions, in costs. The US Federal Reserve could stop printing paper dollar bills and replace them with coins, also saving billions.

Overall, I am happy with government programs. I enjoy taking advantage of them. I don’t mind paying for them.

Buffet wrote an op-ed in the New York Times this week accusing our legislators of coddling the super-rich. They are. He uses his own company as an example:

Last year my federal tax bill — the income tax I paid, as well as payroll taxes paid by me and on my behalf — was $6,938,744. That sounds like a lot of money. But what I paid was only 17.4 percent of my taxable income — and that’s actually a lower percentage than was paid by any of the other 20 people in our office. Their tax burdens ranged from 33 percent to 41 percent and averaged 36 percent.

Does that not disgust you? The second wealthiest man in American followed the law to the letter. He paid his taxes, just as I paid mine. However, my effective tax rate was closer to Buffet’s staff than the man himself. Why do the 98% of Americans no revolt at the plutocracy in this country? The government has engineered a structure that protects and helps the wealthiest Americans keep money and power while encouraging the rest of us to finance our Middle Class lifestyles with debt.

Buffet does not get it either. He clearly attacks the ludicrous claims of the far right. I once had a personal discussion on this topic with a blindly conservative friend. He said that if taxes go up for the wealthy that they will not work as hard because they will take home less for earning more. First off, learn math beyond what Rush Limbaugh teaches you. (Hint, it does not add up) Second, that is the most ridiculous thing I have ever heard. Yes, if your income is $2,000,000 a year and the tax rate goes up on rich people, you will take home less if you earn the same $2,000,000 a year. However, my heart does not bleed for you.

The amazing thing about our graduated tax system is that they pay the exact same tax rate on the first $40,000 they make the same as I do. However, as you make incrementally more, you pay incrementally more on that additional income. If you are confused, here is a good explanation at Bargaineering. As you can see, people that make more money still make more money. Buffet goes on to explain how the tax rate does not scare rich people away from trying to make more money:

Back in the 1980s and 1990s, tax rates for the rich were far higher, and my percentage rate was in the middle of the pack. According to a theory I sometimes hear, I should have thrown a fit and refused to invest because of the elevated tax rates on capital gains and dividends.

I didn’t refuse, nor did others. I have worked with investors for 60 years and I have yet to see anyone — not even when capital gains rates were 39.9 percent in 1976-77 — shy away from a sensible investment because of the tax rate on the potential gain. People invest to make money, and potential taxes have never scared them off. And to those who argue that higher rates hurt job creation, I would note that a net of nearly 40 million jobs were added between 1980 and 2000. You know what’s happened since then: lower tax rates and far lower job creation.

I will not argue that the current tax system is perfect. I also believe that $200,000 per year is not the right place to start a super-rich tax bracket. Again, I agree with Buffet. Increase taxes at $1 million. Have another bracket at $10 million. I promise you people making over $10 million a year will not starve. If you think that they will donate money to the government out of the goodness of their heart, you are mistaken. But if you think they will give up on making money and being rich because they pay a little more in taxes, you are an idiot.

4 thoughts on “Buffet and the Great Tax Debate”