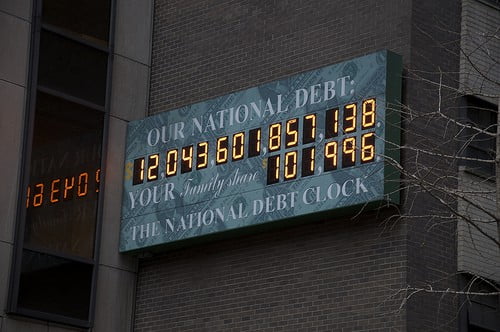 The United States government is on the verge of collapse. You might not know it just by going out to the grocery store, restaurant, or work. People are going on as if nothing is happening, but if you know what is going on in Washington and understand economics, you know how close we are to disaster.

What is the Debt Ceiling?

The debt ceiling is the legislative approved maximum total debt the United States government is allowed to take on. This ceiling has been raised every year without any debate for decades. Republican hero Ronald Regan once famously wrote:

“Denigration of the full faith and credit of the United States would have substantial effects on the domestic financial markets and on the value of the dollar in exchange markets. The Nation can ill afford to allow such a result. The risks, the costs, the disruptions, and the incalculable damage lead me to but one conclusion: the Senate must pass this legislation before the Congress adjourns.”

I am not a fan of Reganomics, but this is something he clearly understood.

What Happens if We Raise the Debt Ceiling?

Life goes on as usual. The government can continue to accrue new debts to pay for current expenses and liabilities.

The downside of new debt, of course, is that we have more debt to pay in the long run. The growing national deficit is a major issue that we have to deal with as a country. It will involve painful decisions.

Like many large corporations, the United States does need to utilize debt to continue to function. To lower the debt, we need to do one of three things.

None of those options are good for Americans or the United States economy. However, we will be forced to utilize a combination of those methods to deal with the increasing debt. The politicians that vote for these changes will be unpopular, so politicians have avoided the looming topic for decades as the debt has grown.

What Happens if We Don’t Raise the Debt Ceiling?

First, the government will stop writing checks. Government workers will be effectively laid off. That is 1,909,000 people.

Social security, Medicare, and Medicaid would stop. Senior citizens and disabled Americans who rely on their monthly check would be left without income.

Debt payments would cease. The credit rating of the United States government would be lowered. National and international stock and debt markets would become unstable and crash. If you think the Greek Debt Crisis pushed the stock market down, just wait for the United States Debt Crisis.

This is not an overnight recovery. Just waiting one day too long (we are already too close) to raise the ceiling would lead to billions of dollars in increased debt costs for the United States government as interest rates increased. Our already fragile economy would come crashing down. Unemployment would rise and consumer confidence would fall.

These Assholes Are Playing Chicken with Our Livelihoods

I occasionally make a political statement on this site, but I usually leave most of that for my personal blog. I have a very strong, factually based opinion on this and I am not going to hold back.

These idiot Republican and Tea Party legislators are playing chicken with the United States and global economies. They hate Barack Obama so much that they are willing to cause irreparable harm to the economy and tens, if not hundreds, of millions of people.

They are acting like children. They are throwing a temper tantrum because Mom and Dad (aka the voters) did not side with them in the last Presidential election. If you want my support, the best way to do it is act responsibly in a way that benefits the majority of Americans. If you act like this, I am closer to using my Second Amendment right for revenge against you than voting for you. (I would never be violent and I hate guns, but I am trying to make a point)

Like most of my well educated friends with a business, law, or engineering background, I am better off today than the day Barack Obama was elected. My stock portfolio is up. I had a promotion and found a new and better job. I am looking at buying a home. Life is good. The Republicans are threatening all of that.

If you are a Democrat, Republican, or unaffiliated voter, you will be dramatically impacted if the debt ceiling is not raised by August 2nd. Traditionally conservative organizations such as the United States Chamber of Commerce are lobbying House Representatives to step back from this dangerous path.

Join them. Write or call your congressman or congresswoman to talk some sense into them. This is not just politics, this is the future of the United States. This is too important to use as a political pawn. We cannot let this happen.

Simply too much is at stake.

11 thoughts on “What Is The Debt Ceiling and Why Does It Matter?”