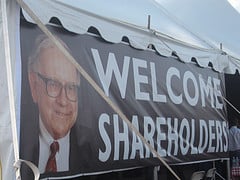 I made it to Omaha and back for the Berkshire Hathaway 2010 annual meeting.  When I pulled up to the shareholder cocktail party at Borsheim’s on Friday night at 9:00pm, I knew that I was not at your typical shareholder event.  The open bar and live band, with plenty of Berkshire shopping opportunities near by, helped to kick off one of the most fascinating and fun events I have ever attended.  I even met Netjets CEO and Berkshire CEO hopeful David Sokol.

But I am sure you are not reading this to hear about the dancing and the drinking, you want to hear what Warren Buffet and Charlie Munger told us about the outlook of the company and the economy.  The duo was very conversational and fun watch.  Munger’s most memorable quote from the day was “I have nothing further to add,” which was said at least a dozen times and never failed to get a chuckle.

The day opened up with a video presentation that acted as a digital cheerleader for Berkshire companies.  The presentation started with an epic video about Burlington Northern Santa Fe Railway, the most recent and largest acquisition in Berkshire Hathaway’s history.  It followed with a string of commercials for Geico, Coca-Cola, and virtually every other holding.  It also included an interesting preview of a cartoon intended to get young kids interested in investments.  “The Secret Millionaire’s Club” featured voice work by Warren Buffet and Bill Gates.  The Desperate Housewives also made a video appearance, though I was not lucky enough to see Eva Langoria in person.

From there, Warren led a question and answer session that lasted for about five and a half hours.  Questions ranged from Goldman Sachs and earthquake insurance losses to international investments and succession planning.

The major highlights to me revolved around the Goldman questions, insurance losses, and the economic outlook as it applied to Berkshire Hathaway.  Warren Buffet stood behind Goldman Sachs and defended all of its actions.  Goldman profited from the housing market collapse, and there have been many questions about the legality and ethics surrounding those deals.  Buffet said that there will always be short sellers and always people going long.  Some win and some lose.  In this case, Goldman made a smart decision and won very big.

I had no idea about the scale of Berkshire Hathaway’s insurance operations.  Berkshire was involved in reinsurance in Chile and lost about $3 billion (if memory serves) from the recent major earthquake there.  Munger said that insurance losses are a completely acceptable part of doing business as an insurance company.  Buffet added that Berkshire was paid a premium to take that risk.  I also like to note that Berkshire does quite well investing those premiums prior to losses.  Either way, both Buffet and Munger agreed that even in the event of a catastrophic earthquake in California or a major securities insurance loss, the company would remain profitable and viable.

In all, the event was great for company spirit and enjoyable for investors like me.  I even made it to the post meeting Tweet-up and met some interesting and fun people.  I also felt confident that my investment in Berkshire Hathaway is secure and in good hands.  As another blogger recently put it, BRK stock is one of the best diversified mutual funds you can buy.

Keep your eyes open for pictures from the event sometime soon.  I hope to get those loaded up and posted over the weekend.  Also, thanks to my good friend @JRideout for attending the entire weekend, complete with eight hour drive each way, with me.

P.S. Warren said we should all drink more Coke and eat more See’s Candy.  For the sake of my shares, I suggest you do your part.