Hello from Portland! Last month, I shared the big news that DenverEric is moving to Portland. Well, one month later and here I am. I have a post written for later this week that will give you all the details of how I ended up here. But for now, let’s just dive into the usual stuff and how my net worth and online income fared this month.

What’s Eric Up To

This move is bigger than any I have ever done as an adult. The farthest I ever really moved was within an hour drive of home, so picking up and heading 1,200 miles away comes with its own learning experiences. Picking up and leaving was actually the easiest part. Dealing with moving companies has been a nightmare. Finding a new place to live in Portland was a challenge. But we’re making it through.

I have loved exploring my new city and the great adventures it has to offer. On the drive out, I had an overnight in Idaho, bringing me one state closer to my life list goal to visit every state in the USA. Only North Dakota left and I have visited every state West of the Mississippi River. While you are there, you can check out some of my early 2014 additions. 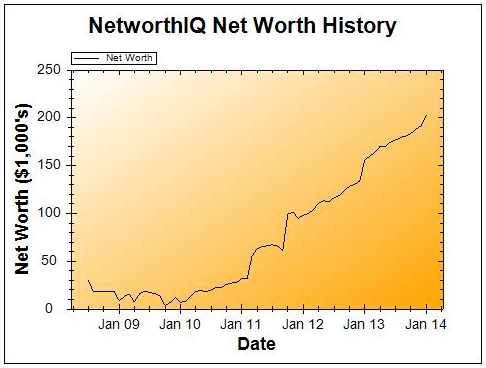 At the end of the year, I made a transfer to max out my Roth IRA for 2013. You can still make Roth IRA investments for 2013 for a couple of months, so it isn’t too late. I suggest all young professionals max out their Roth IRA each year ($5,500 maximum for 2013).

I did a 401(k) rollover from my old employer’s plan to my Rollover IRA at Charles Schwab. I invested most of the funds in Vanguard funds with a very low fee. I had a special fee waiver that makes Vanguard investments in my Schwab account free, but for most people without a Rollover IRA account, I think investing directly through Vanguard is the best option today.

My new company’s health insurance doesn’t start for 90 days, so I had to decide what to do to bridge the gap until March. My old company’s COBRA coverage option was $450 per month, so I found something else. I picked up an Oregon policy with Obamacare that cost $227 per month for comparable coverage. Thank you Obamacare! That saved me over $600!

I had my first loan default with Prosper, which is a huge bummer. After only a short time with Prosper and a long time with Lending Club, I am much happier with my Lending Club performance. My net annual returns at Lending Club are 12.43% and I have no plans to withdraw a cent in the near future. I currently have 45 active loans, 0 in funding, and 20 fully paid, and one loan 16-30 days late, which I have listed for sale on the Lending Club trading platform. I have earned $169 in interest, so even if one loan goes bad I’m still doing great.

I have no plans to slow down my overall investing in the near future. My biggest focus in general is my automatic investing in my retirement accounts.

I have a $30,000 savings goal for my liberty fund. I MADE IT! SUCCESS! This is the last time you’ll see me writing about the Liberty Fund here. It took me about 18 months to save that much, which took a lot of work. I cut back on spending and put a bigger focus on side income so I could save even more. After my November income, I crossed the finish line.

Now, I am focused on my financial freedom cash flow fund. I am trying to save for early retirement, if I feel like it, or the ability to jump to full-time self employment.

The bulk of my liberty fund is in a combination of high interest savings accounts and a stock investment account. I suggest 360 Savings from Capital One 360 for this type of savings. I began this fund with a $5,000 emergency fund goal and have expanded it to give me more flexibility and a bigger cushion. Just don’t have too much cash in your emergency fund, and occasionally re-evaluate if your emergency fund is too big.

I was below my $1,000 revenue goal for the first time in a few months, but also spent quite a bit less time working on my online income over the last month since I knew I would be moving. If you think all online income is passive, think again!

I created a new WordPress plugin a couple months back to solve a problem I had. I was trying to convert from the Thesis Theme to Genesis (did you notice?) and couldn’t move my Thesis post images as expected. My new plugin takes care of that and is available for $10, of which I get $6 per sale.

As part of the move to Portland, I was planning to sell Denver Flash Mob. The two serious discussions I had fell through, so I found a local manager to handle things in Denver and I’m handling the communications and promotions from Portland. We’ll see how this goes over the next couple of months as things kick back up.

In total, my net worth was up $11,106, or 5.79%. I update my condo value and car value based annually in January, and that is the biggest part of the jump in net worth this month. I pay off my credit cards in full each payday.

Manage your privacy
To provide the best experiences, we use technologies like cookies to store and/or access device information. Consenting to these technologies will allow us to process data such as browsing behavior or unique IDs on this site. Not consenting or withdrawing consent, may adversely affect certain features and functions.
Manage options Manage services Manage vendors Read more about these purposes
Manage options
{title} {title} {title}
Go to mobile version
Loading Comments...