One thing I always focus on with personal finance is big wins. Who cares if you can save 47 cents on your shampoo when you can save much more with less effort focusing on large, recurring expenses? This month I changed my phone service provider for the first time in six years, and I’ll save thousands. This is the tale of my journey to Google Fi.

Getting in Deep with Big Red

My parents never paid for my cell phone. When I decided I needed one as a college freshman, I got my first Nokia phone with a local plan from AT&T Wireless for about $20 per month. That grew after a year or two when I upgraded to a nationwide plan, but I was always unhappy with the shitty service.

Any time I was chatting with someone doing the drive between Denver and Boulder, I gave a warning going over the big hill where I would lose my service that I would have to call back in a minute or so when my signal returned. While the area Southeast of Boulder is beautiful, it sucks when your phone stops working.

Fed up with the dropped calls around town, I united with my parents and sister under a new family plan. With the family plan, we agreed to split the monthly service cost four ways and would each pay for any additional charges for our own lines. That was around January 2010, before I got my first smartphone.

Like with most cell phone companies, my bill grew as I wanted shiny new features. My bill grew dramatically when I picked up my first Android phone with internet service, and Verizon seems to keep finding new ways to squeeze money out of its customers.

While my calls and texts have become unlimited, my data took the opposite turn. In a move designed to save money, we slowly switched our lines from grandfathered in unlimited data to a family pool of data. Just before our wedding, my wife joined the family plan as well.

I’ve always been the one in charge of paying the bill and calculating what everyone owes. Thanks to my employers over the years, I have always been able to get us a 10%-20% discount on our bill, but Verizon only applies that to the shared portion of the bill, not individual line fees. Paying with my Ink credit card gets me 5x miles per dollar spent, but my wife and I still end up paying about $110 per month for our lines ($11 for our portion of the family plan and $42 for each line).

Waiting Our Way Out

Of course, leaving a cell phone company is not a simple thing. Each time someone in my family upgraded to a new phone, we took the deal from Verizon to get the phone at a discount in exchange for a two-year contract.

During that contract period, Verizon kept nickel and diming us at every possible opportunity. The worst offenders are the made up taxes and service charges where they ding you for at least a few bucks every month. If they want to charge more, they should just charge more. Not a huge deal in the scheme of things, but fuck you Verizon for doing it and getting away with it.

In pretty much every country outside the United States, big telecom companies can’t get away with the crap they pull here. American consumers don’t really know any better, but in other countries, you can buy a phone and change your cell phone provider at any time. You just need to pop a new SIM card in the back of your phone and you’re up and running with a new carrier.

That goes back to two fundamental differences between the United States and the European Union. In the EU, the government puts people first and created a network standard for cell phones early on (GSM), while in the United States companies were allowed to do whatever they want and create networks using different technologies. Unless you have an unlocked GSM phone, which wouldn’t work on Verizon, it would be nearly impossible to take your phone with you to a new carrier.

A couple months ago, our most recent two years were up, and we could look around for other options.

Over the years, I have considered different phone options a handful of times. I really like Republic Wireless, but never switched for two reasons. First, I couldn’t get the best and newest phones. The list from Republic is fairly limited. If I could get past that, I was still nervous about network coverage. Republic Wireless runs on the Sprint network, which has weaker coverage than Verizon, or even AT&T.

I am a big Google fanboy. I owned the first generation Chromebook CR-48. I signed up for Google Voice as soon as it was available. I have a Google On wireless router. I got my Gmail account on August 23rd, 2004. That was probably before you heard of Gmail.

When I learned about Google Fi earlier this year, I was excited and hesitant at the same time. Could I really escape the gravitational pull sucking me into Verizon? Do I really want to hand over another part of my life to Google? Would it really work?

I have since realized: Of course it works. It’s Google.

I gave into temptation and started the process of moving to “Project Fi” on November 12th, when I filled out the form requesting an invite. (You can’t just sign up for the service, you need an invite. Our invites came about a week after signing up. It looks like they send out invitations in batches each Monday, and it usually comes the Monday after you sign up through the form.)

On November 16th, I got the exciting email proclaiming that “Your Project Fi invite is here!”

Getting Started with Project Fi

After some back-and-forth with my family, I decided it was time to leave the family plan (I’m still paying my portion and my wife’s portion of the $64 per month split five ways until their contracts end in April. I’m a nice guy and don’t want to leave my family paying my part of the bill.)

The signup process for Google Fi is so simple, at the end I turned to my wife and said, “that’s it?” 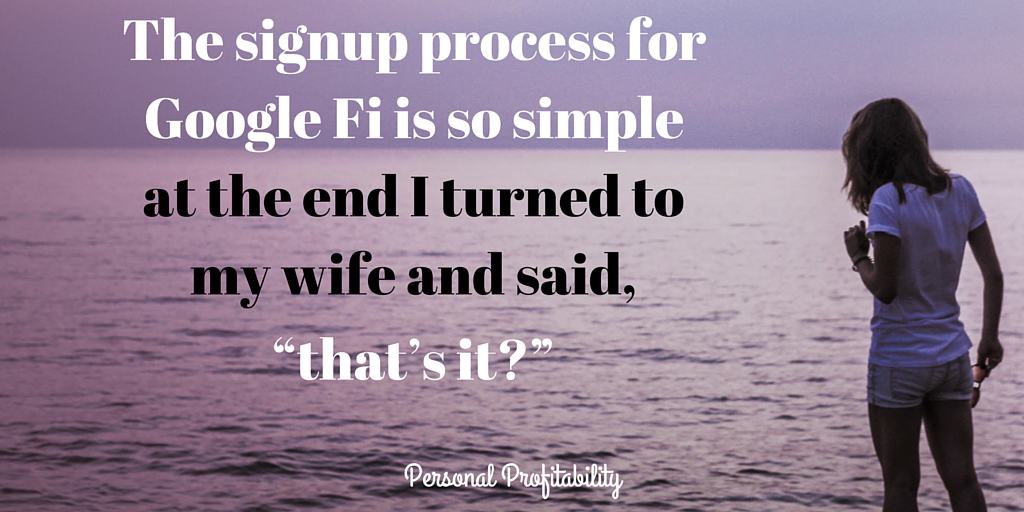 Signing up is simple and straightforward, just like my new cell phone plan. Here’s how it works.

That’s it. Really. Taxes come out to about $2-$3 per month and are actual taxes, not “administrative fees” to make a bigger profit for Google.

You pick your data amount for your monthly bill (I picked 2 GB). If you go over your amount, you pay $1 per 100 MB – the same rate you pay on your recurring bill. If you use less, you get a credit on your next monthly statement. For example, if I use 1.2 GB in January, I’ll get an $8 credit on my February statement. If I use 2.1 GB in January, I’ll pay an extra $1 in February.

If you make international calls and texts, you are charged at the Google Voice rate (super cheap). If you travel outside of the United States, your phone works in about 190 countries. You pay 20 cents per minute for calls. SMS text messaging is still included at no extra charge, and your data charge is the exact same as at home. No $20 per megabyte like Verizon charged the last place I visited if the phone even works. When abroad with Goole Fi, however, you typically do not get 4G coverage. You’re stuck with 3G or a little slower depending on the country.

You do have to purchase (or own) a supported Nexus phone to use Google’s special dual network SIM card. I got the fancy new Nexus 6P, which I am paying for over 24 months with no extra finance charges. My wife paid for her new Nexus 5X outright.

The phones use a hybrid Sprint/T-Mobile network. Whichever is stronger, my phone uses. If there is strong WiFi available, it uses that instead. Calls transition between the two seamlessly. My network coverage is not quite as strong as it was with Verizon, but it works well at my home, my office, and just about everywhere I’ve gone in the Portland area except for a farm in the middle of nowhere and the bottom floor of a concrete skyscraper in a restaurant in Southwest Portland. Everywhere else, my coverage has worked just fine.

There are no family plans for Google Fi, so my wife and I are going it alone. My expected cost is $42 per month for service including taxes plus 1/24 of the cost of my phone for the next two years. I did the math and Google actually rounds down on the 1/24 per month. My wife’s cost will be under $30 per month based on her typical usage.

That’s right profiteers. Our phone bill is going from about $110 per month to less than $70 based on typical usage. In November, our bill would have been half of what it was from Verizon based on that month’s usage.

Is Google Fi Right For You?

If your phone service comes from one of the big providers like Verizon or AT&T and you want to save money and don’t live in an area with bad coverage from the Fi network, yes, you should switch. There are no iThings on Project Fi, so if you are an iPerson, you have to leave your iPhone behind and join the most popular mobile operating system in the world.

Do be careful to check the coverage map on places you regularly spend time. Also, remember that Project Fi phones can run on WiFi, so if your home is a dead spot, you will still get service from your wireless internet service. However, I would not have made the leap if I lived in a place with poor coverage, like that farm I went to in Middle of Nowhere, Oregon.

Questions? Comments? Think I’m nuts? Let me know what you think in the comments.