Everyone knows I’m a huge travel hacker, but there is a whole world of credit card deals I rarely dabble in. That is the world of deal stacking and coupon stacking. It’s kind of like that Extreme Couponer TV show, but instead of clipping coupons it is scouring the internet for deals you can get from the comfort of your own home, or sometimes with a trip to the store for some very specific purchases.

I finally gave in and got one, a deal for paper towels at 45% off. For that kind of savings, I couldn’t resist! Here’s how the deal worked and how you can get it yourself, or use it for virtually any other purchase at Boxed.com.

$25 off $65 or More at Boxed with American Express

This stacked deal starts with American Express. I have two Amex cards currently. First is the Business Platinum card for my business, which gets me lounge access, travel credits, hotel status, tons of points and much more. Second is the Everyday Preferred, which gets me even more points with special bonuses at grocery stores and a 50% monthly point bonuses if I use the card enough times per month. That adds up to a lot of free and discounted travel, but there are some other American Express benefits I enjoy as well.

One is called Amex Offers. In Amex offers, you can find Groupon like deals where you spend X dollars for a discount of X dollars. But with Amex Offers, you just browse the list, click to activate, and if you go make a qualifying purchase at that store by the expiration date, you get the deal. My 45% off shopping trip started with this deal for Boxed:

I had to spend $65 or more to get $25 back for this specific deal. I didn’t want to do shopping I wouldn’t do otherwise, which is the main goal of Boxed and Amex here. However, they did get me to buy something at Boxed that I might have otherwise bought at Amazon.

Add in a Signup Bonus from Boxed 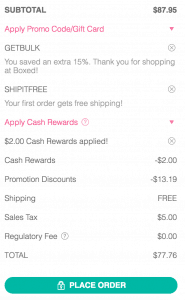 I had created an account at Boxed once upon a time, curious about the Costco and Sam’s Club style deals online with no membership fee. I never bought anything there, so the first time I shopped there I qualified for 15% off. I have an even better deal for you now, however, a $15 off coupon for first time shoppers who use my link at Boxed for a purchase of $60 or more. If you don’t see the deal after clicking, just enter my referral code, XFJYL. (I also get $15 when you get the $15 off deal. Thanks!) That is worth 25% off on its own. With the Amex deal, it is 46% off!

I got 15% off as a first time shopper plus a $2 Cash Rewards bonus as part of the referral. This is where you would get $15 from my link. Because my order was over the free shipping threshold, $49 here in Ventura, California, I had that waived as well. The Boxed FAQ states that 95% of orders qualify for free shipping.

But to maximize my discounts, there was more I could still do by picking the best products.

Promotion Pricing on a Household Staple

With a 1 year old and two dogs at home, we go through our fair share of paper towels. My wife says I use way too much when I clean up after the dogs have an accident, but I digress. Maybe I do use too many at once. But eventually, we will go through them.

I don’t want a dedicated horder room at home like the Extreme Couponers with a giant stash, but a few extra packs of paper towels doesn’t take up too much room. We are moving soon, so I know we are going to be doing more cleaning than usual and need more paper towels than usual. I saw an email from one of my favorite travel hacking writers, The Frequent Miler, about the deal on paper towels at Boxed. Here’s where the final step in the discount stacking comes together. Hat tip to Nick for getting me to try this one!

The Frequent Miler had already price shopped this item, so I knew it was a good deal compared to even Costco and Sam’s Club. Taking advantage of this deal four times over puts my purchase at $80, above of the needed $65 for the Amex deal.

There were some other promotions available, so I bought one more item, an Indian microwave meal packet, to take advantage and earn a total of $13.19 in promotion credits, further lowering the cost. Boxed also throws in free samples sometimes, just like a visit to Costco, and I ended up with another free roll of paper towels, some tea to try out, and a Quaker Oats breakfast bar.

The three boxes came right on time, and were packed by Walter and Emanuel according to the packing slips. I was happy to get the order, but I think my daughter enjoyed it a bit more than me.

We ended up with 49 rolls of paper towels, three moving boxes, and an entertained little girl. The paper towels were a great deal. Sure, it saved me less than $30, which is not nearly the value I get from travel hacking. But it’s a small win, and one that can be repeated by finding similar deals across the web.

If you are in the need for paper towels, or anything else, you can get a big discount too! Head to Boxed using my link for $15 off yourself. And if you have a qualifying American Express card, you can quickly increase that to $40 off a purchase of at least $65. With promotions, who knows where you will end up! Let me know how it goes in the comments. 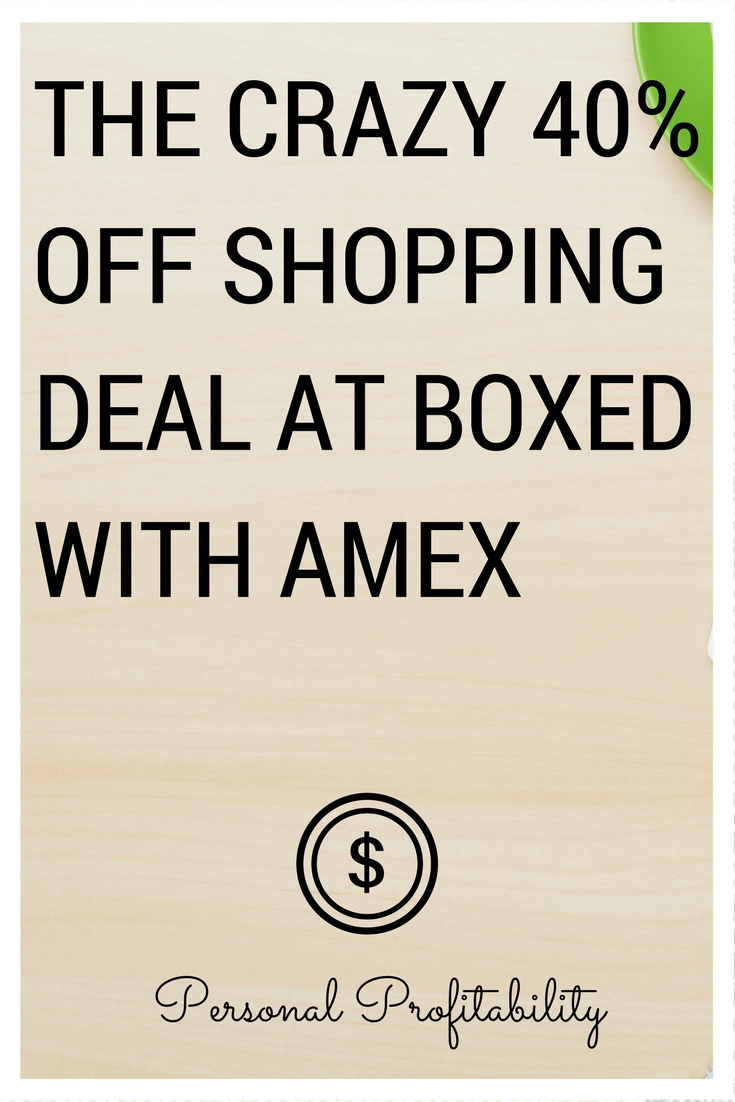