I remember first learning about Bitcoin in its infancy, but despite the excited chatter around this new cryptocurrency, I always hesitated to put my own money into the speculative digital currency. In September 2015, I went for a deal that offered me $37.50 in free Bitcoin if I opened and funded a new account at Coinbase, a major Bitcoin wallet provider. It was an interesting ride.

My first attempt at buying Bitcoin was not an easy one. While I could use Bitcoin to make purchases at a few restaurants and stores around town, there was no practical use for Bitcoin in my daily life. In addition, it was not easy to buy or sell. That is why it took something special to get in into my first “investment” in Bitcoin.

Bitcoin is a very risky place to put your money. While it has been on an amazing run lately, the increase in value from Bitcoin is tough to quantify economically. It is a free market with a limited supply of Bitcoin and extensive demand, so the price of a Bitcoin tends to increase. This can lead to an investment return, but I look at Bitcoin more like gambling than investing.

I have been a user of the app Paribus since its launch, and while Paribus has not offered me much recently, I saw a note in the Paribus email newsletter on September 15, 2015, for $35 free.

I followed the link to the Paribus Blog titled: How to earn $35 in 5 minutes (repeatedly). I’m a big fan of easy money, and reading through the article I found that if I signed up for a new Coinbase account and bought over $100 in Bitcoin, I would get $37.50 for free. All that in five minutes, count me in!

Well, it took longer than five minutes. I had deposit limits to my Coinbase account when I signed up and was only able to transfer $50 at a time and had to wait in between. The minimum transfer was $5, so I ended up funding my account with $105 from my checking account, though it wasn’t easy. I was finally able to buy the Bitcoin, and as promised $37.50 showed up in my account.

I made a purchase, and just like that was a Bitcoin investor. I was okay putting in $105 as a speculative investment that I was 100% willing to lose. If that $105 in Bitcoin fell to $5 in value, it wouldn’t have impacted my life. That is the right way to look at the risk of Bitcoin. Only put in what you are willing to lose.

I Forgot About it For Almost Two Years

After I bought Bitcoin and got my $37.50, I had about .60 Bitcoin. I wasn’t impressed all that much with my fraction of a Bitcoin, so I forgot about it. I left my Bitcoin in my Coinbase account and it just did its thing for a while.

I went on a family vacation in Victoria, BC with my wife’s family, and my brother-in-law asked me about Bitcoin. I said, oh yeah, I have some Bitcoin I bought a while back. I wonder what that’s worth these days.

It took me a few minutes to download the Coinbase app, log in, and view my balance. When I did, my jaw almost hit the floor. I had about $1,000 in my account. Holy cow! My $105 was now worth just shy of ten times that much!

When I picked up my 60 Bitcoin in September 2015, the price per coin was a little over $200. Bitcoin has gone off on a meteoric rise lately. While I may be shortsighted, I’m a pretty conservative investor. I would rather put my money into investments that are long-term oriented. I have no idea what Bitcoin will do next. Maybe it’s in the middle of a bubble. Whatever it is, I decided that at a 10x return, I’m happy to take my money and run for the hills.

How to Invest in Bitcoin

If you want to invest in Bitcoin, I can’t emphasize enough that this is a high risk. While Bitcoin could fly to $5,000 tomorrow, it could just as easily plummet back to $200 or less. Invest only what you can afford to lose.

Now that I am up and running with Coinbase, I happily suggest it to others. There are some significant fees for buying and selling, but with your Coinbase account, you can store and transact in United States Dollars, Bitcoin, Litecoin, and Etherum. Litecoin and Etherum are other cryptocurrencies that work like Bitcoin.

Just head to Coinbase or download the Coinbase app to get started. From your Coinbase account, you can easily buy and sell any of the three supported currencies. Beware there are some delays in processing, so don’t expect to day trade.

Is Bitcoin Investing Right for You?

Bitcoin has seen a crazy value increase over the last few months. I think there may be a Bitcoin bubble underway. Similar to the stock market during the tech boom of the 1990s and real estate just before the Great Recession, Bitcoin may come tumbling down soon. No one knows for sure, and I certainly don’t have a crystal ball, but my advice is to avoid Bitcoin and put your money into something more predictable and stable.

But for now, it’s anyone’s guess as to what will happen next. Are you a Bitcoin investor? Share your story and thoughts in the comments. A skeptic? I want to hear from you too! What do you think is happening next in Bitcoin? Share below. 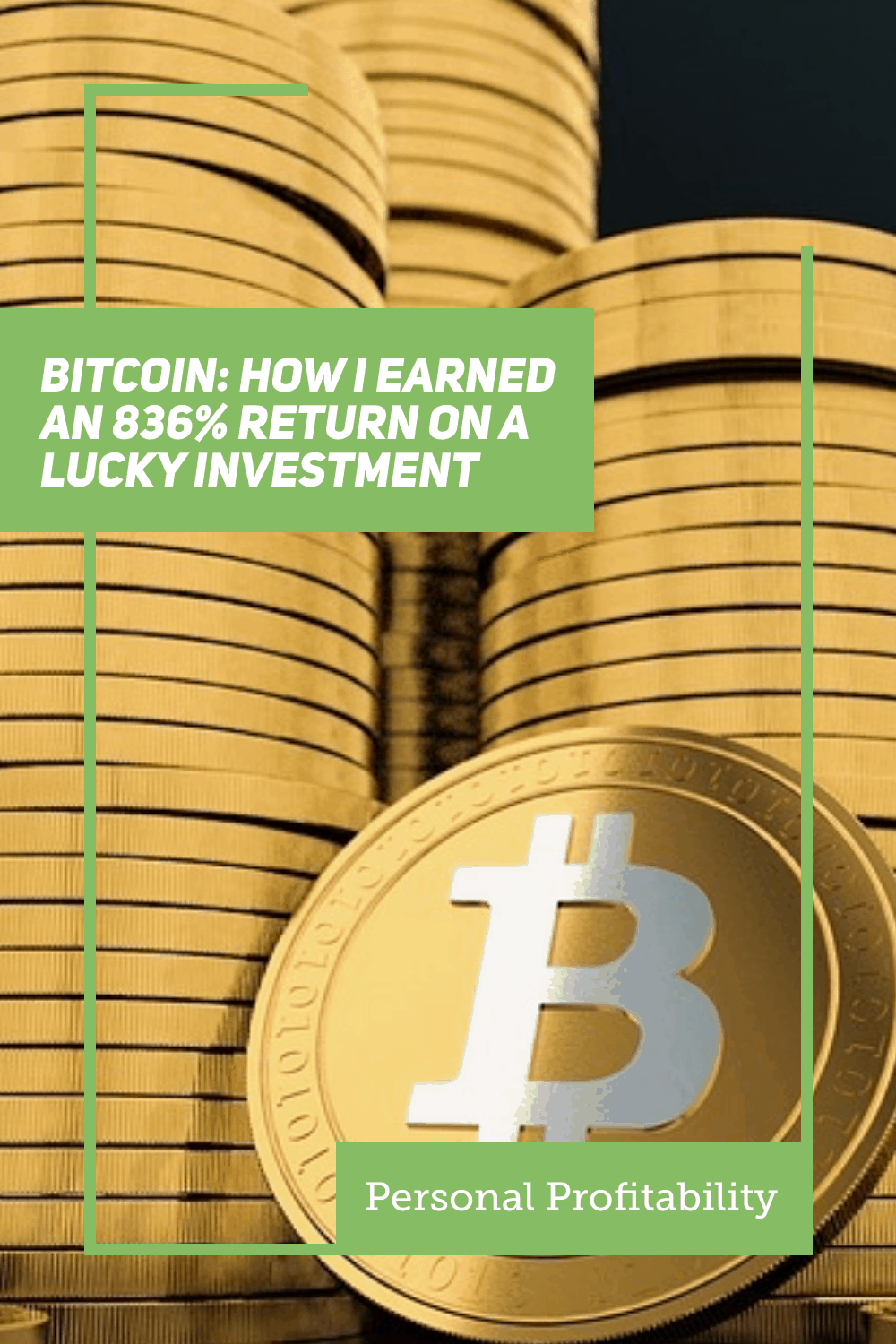 5 thoughts on “Bitcoin: How I Earned an 836% Return on a Lucky Investment”