A little while back I was reading a Reddit post about how people earn money on the side, and I came across Chris, who owns an eBay store where he sells rare and signed books. He was gracious enough to share his story with us and answer some questions about how he makes a substantial income from the comfort of his home.

Where did you come up with the idea to open an eBay store? How did you get started?

For a while I was working in a local used bookstore and I started noticing books I thought were vastly underpriced. With the help of some coupons I managed to pick up a first edition copy of The Return of Sherlock Holmes for about $15 and a first edition copy of For Whom the Bell Tolls for under $3. I listed these books along with some lots of less valuable books from my collection in an attempt to downsize what was rapidly becoming unmanageable (shelves lining each wall and stacks of books on every flattish surface).

With this early success I realized this was something that could potentially be quite lucrative and at the same time keep me around the books that I love so much. I started buying up deals when I saw them either in person or through strategic internet scrolling—something I soon found myself doing whenever I was bored or had a little free time. I started the eBay store specifically for the reduced fees and extra free listings, but I have found that it makes a nice front for my merchandise and has the added benefit of a nice easy link to refer potential customers to my business.

What is the biggest lesson you’ve learned when creating eBay listings to drive the most sales?

Some of the biggest lessons I learned early on weren’t from anything I did myself but from watching other people’s mistakes. I could spend hours combing through eBay auctions tailored specifically to the type of books I want to sell and it was rare that I would find anything priced significantly low enough to make enough money after fees to even put in the effort of buying and reselling them. But the few things I did find with a significant profit margin were books that were just poorly marketed. I’ve bought books with the title “book”; I once bought a biography of President Truman that mentioned it was signed but didn’t mention it was signed by the president.

These sellers were losing a lot of money just by being too lazy to list their items properly or simply not using common sense in their listing titles (I just hope these types of sellers aren’t reading this now or it’s going to severely affect my revenue stream). I don’t use buzz words or anything in my listing titles but I do make sure that the most valuable pieces of information are readily available, otherwise how are the people willing to give me money going to find my shining needles in the giant stack of hay that is eBay.

Is your eBay store your primary income, or a side hustle? Do you have plans to make it a full-time living?

At the moment eBay (and hopefully soon other marketplaces) is my primary income but mostly because I haven’t found a decent full or part time job. The best part about this business is how well it works as a “side hustle”. I started selling books while I was still working 30 hours a week at the used bookstore and started making money pretty much right away.

By the very nature of being a primarily online business I get to set my own hours, work only when I want to, and exchange any time I can/want to for profit. I would love to eventually make this into a full time career, either working for myself or for one of the big names in rare books, but as of right now it’s really not enough to live too comfortably on.

Where do you source your books for sale? How much do you like to keep in your inventory?

I started out primarily buying books from the store I worked at and from various websites. Since then I have moved into visiting other local businesses: from flea markets, antique malls, and used bookstores to yard sales and estate sales. I don’t really worry about a set inventory. I buy books that I know I can make money on and as long as I can still move about in my apartment without directly stepping on books I will continue to purchase as many books as I can find. The books that I deal in (primarily rarer books whether antique, signed or first edition) tend to be niche items that can take a while to sell so my inventory has grown rather steadily.

I bought a signed copy of Jack London’s Call of the Wild (unfortunately a 10th printing) that was in rather rough shape for $100 with the intention of having it repaired and reselling it for upwards of $1000. I ended up listing it as is and still sold it for $525 making it the most expensive single book I’ve ever bought and sold (so far).

I came into this business with a decent knowledge of books; between working in a book store, majoring in English in college, and having a lifelong passion for reading. This basic knowledge tempered with insight gained from running the business means I generally have a good idea of how much a book is worth without doing much outside research. That being said before I make a purchase of any significant amount I do use varying online sources (eBay sold listings, vialibri.net, Amazon) to come up with a full picture of both asking prices and selling prices.

Sometimes (if I’m lucky) the books I’m buying and selling are one of a kind and it can be a risk spending a decent sum of money on them, but so far using my knowledge that always seems to be a risk that was worth taking. eBay can be a risky place to list your items if you don’t use it properly. Something as simple as listing a high value item with a low starting price in the auction format in a time frame that is bad for sales (for instance immediately after Christmas) can mean your item sells for significantly less than it’s worth.

I avoid this by starting auctions at a reasonable selling price or listing items as buy-it-now with best offer so I’m never taking a price I’m not comfortable with. On the other hand I know for a fact some of the one of a kind items I sell are going for less than their worth simply because I don’t have the right connections to sell them at their potential value.

For instance I sold a copy of Carl Sandburg’s autobiography signed to then president of CBS and television hall of famer Frank Stanton for $500, and while this was a great profit on what I bought it for I think it could have been worth substantially more if I knew anyone at CBS nowadays. Right now I have a set of books that have been in the Ewing-Sherman family for well over 100 years and are signed by General William Tecumseh Sherman’s wife to their children, as a high value item they will most likely sit on eBay for a while whereas a few decent connections could have them sold tomorrow.

Do you run your online business out of your home, or do you have outside space you use? How do you store your inventory while waiting for buyers?

I do run my business out of my home at the moment. I still have the bookshelves lining every wall but I’ve gotten rid of most of my personal collection and now instead of cheap fantasy books and beat up Mark Twain novels they’re covered (quite liberally) in my much more valuable inventory.

What is the biggest thing you’ve learned from your eBay store experience that you wish you knew when you started?

One of the biggest ongoing mistakes I made early on was my inability to separate perceived value from actual value. A lot of my early purchases were made along the lines of “this book is too cool not to be worth more than that.” Sometimes that steered me well,, but especially without figuring too much into fees and shipping costs early on I did make a few purchases that resulted in a net loss.

If you were going to start over today with a new eBay store, what steps would you take to start earning a profit as soon as possible?

Honestly I’m pretty happy with the way I started my business. There were a couple mistakes value-wise early on but the total net losses have been pretty low. Some of the only things I could really have improved on were basic costs that could have been minimized if I had been better informed: I used to buy shipping materials at big box stores and spent way too much money on them compared to buying in bulk online like I do now. Even now I’m still learning, testing the waters with different auction formats and branching out into other seller marketplaces.

Do you think others could have similar results starting their own selling business on the side?

I specialize in selling books because I love books and that has made every moment of this fun rather than seeming like extra work, and the fact that I knew a decent amount to begin with has curbed a lot of the beginner mistakes I would have made otherwise. But everything I’ve learned is equally applicable to any item you could think of. If you don’t know anything about selling books I wouldn’t recommend following in my footsteps, but if you like sports there’s a huge market out there for sports memorabilia. Ditto for toys, electronics, clothes, etc. But if you just like money there’s no need to specialize at all, enough intelligence and research can turn retail arbitrage of any sort into a very lucrative career or side business.

If you want to visit and support Chris, here is how to find him:

If you have any questions for Chris about his online business, please leave them in the comments below! 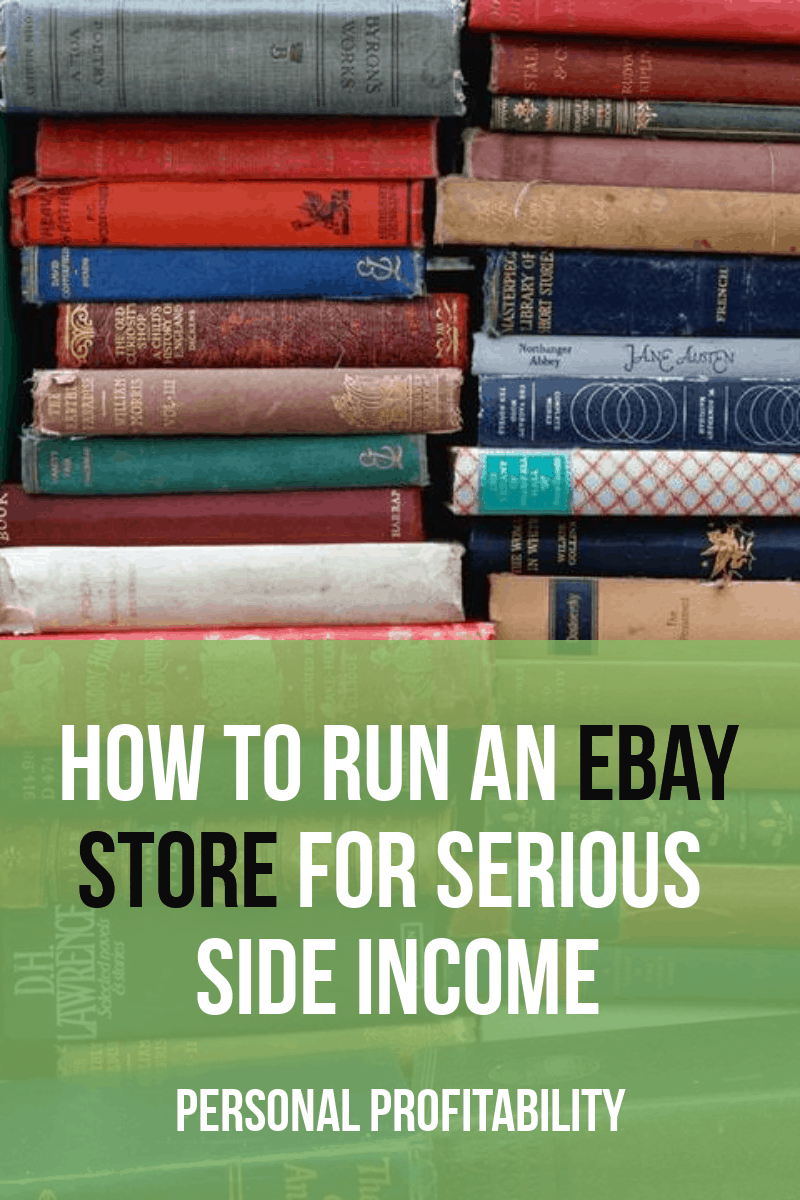