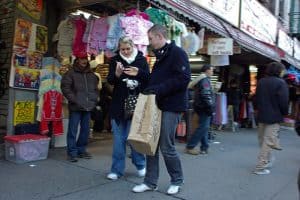 A few weeks back I was standing on Canal Street in New York at the center of Chinatown.  I was helping one of my friends haggle the price of a fake Louis Vitton purse down from $100 to $30.  I realized that you can learn a lot about life walking down a Chinatown street trying to get the best deal.

Patience is important.  Knowing what you want and what you are willing to pay is the first step.  Sticking to the plan is much more difficult.  When you get off of the subway stop on Canal, the street vendors know they are getting first dibs.  One of my friends wouldn’t hold out on a fake Rolex and bought one for $10 more than my other friend did two blocks down.  When you are shopping around for cars, it might be tempting to buy the first one you see.  However, patience could save you thousands.

Be persistent.  These people are real sleazy salespeople.  They know that they can talk you into spending $5 more.  However, you have to know where to draw the line and where to say no.  Just walking away can often get you the price you want.

Ask for a fair price, but do not be rude.  A first year college graduate would be pretty ballsy to walk into a job negotiation and ask for $100,000.  For most employers, they would look at that as rude and unrealistic and it might cost someone a job offer.  If you walk up to a fake purse vendor and ask for a Coach bag for $10, he will just tell you to leave.  You can negotiate from a fair starting point, but don’t be arrogant.

Know when to walk away.  Some people just will not give you a fair deal.  I left the mattress store when I was last looking for a bed after the sales guy offered something too good to be true followed by a bunch of delivery fees and a floor model only stipulation.  Don’t be fooled and don’t feel bad leaving a bad deal.