In early 2013, my pal Jeff and I were itching to start a new business venture. Such is the life of a serial web entrepreneur. We had both built reasonably successful personal finance blogs, so we thought we would team up and try our luck at an online store. In the end, we lost about $1,000. It could have been much worse, but we learned a lot along the way. Here is the story and the lessons we learned.

To Buy or Build? 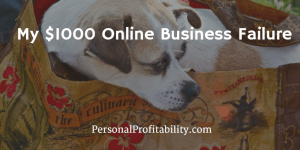 We started out asking ourselves if we wanted to buy an existing site and try to grow it, or if we wanted to start from scratch. Knowing that it can take years to get a site off the ground, we decided to invest in an existing store, so we took to Flippa, an online marketplace for buying and selling websites, to find the best option.

We looked at dozens of listings before choosing one we liked. We put in a few bids and won the auction, but when we started the escrow process, things were not adding up. The seller changed email addresses used for the purchase process, and I quickly linked the seller to a long history of fraud. We contacted Flippa, the transaction was cancelled, and the guy was banned from the site. We should have stopped there, but we didn’t.

We kept on looking and found another listing that had a good revenue history, big potential for growth, and it was something we could easily write about and understand: reusable shopping bags, reusable lunch bags, and reusable sandwich and snack bags. Simple enough. We decided to go for it.

Our cost for the site was about $500, which we split 50/50. The transfer of the site, hosting, and Facebook page went smoothly. So far, so good. You can view the original listing here.

Growing Our Store, or Not

Once we took over, our next step was to try to build traffic. The site was hosted on BigCommerce, a popular site for hosting ecommerce stores. BigCommerce is very easy to use and has an intuitive interface, so for beginning ecommerce store owners, it can be a good option.

However, for the luxury of using their platform, you have to pay a monthly fee. Our package had a $30 per month fee. Over a year, that adds up to a lot. $360 to be specific.

To stop the bleeding, we decided to move the store to my existing web hosting account, as I had plenty of bandwidth for the very few visitors we received each month. I am a WordPress guru for hire, so it was no problem for me to build out a fully functioning store in an afternoon. It took a few more days to make it look nice, but we were off of our $30 a month platform and were not resting on a host that cost about $5 per month that I was already paying.

At this point we were pretty sure we got dupped on Flippa and had very little go off of. We decided to do what we knew best, and wrote a few blog posts to see if they would generate any traffic. Nope.

We spent money on Google AdWords advertising. Again, a big flop. We tried marketing to our existing Facebook fans, but they appeared to be dummy accounts. We really had nothing to go on.

Our new design was decent, our store was working just fine, but the orders were not coming in. What did we do? Nothing.

We were burned out from the work we had put in, disenchanted from buying a dead store, and we looked at our competition and found that we were just not going to be able to compete with the $1 bags at the checkout line at every grocery store in America.

We discussed using our existing drop-ship relationships to build out an Amazon store, but the cost and effort to get setup did not seem worth it. At this point, we were pretty much over the store and just wanted to get money back to try to make up for our $1,000 in sunk costs we had accrued from purchasing the store, hosting at BigCommerce, and advertising.

Jeff had the site registered in his name as part of our arrangement, so he took the lead listing our site for sale on Flippa. Not surprising, with no sales it is much harder to sell a store for a good price. We ended up making back about $25 on our $1,000 investment.

In the sale process, we sold both the domain and the design and site content. Based on my current rates, the content and website design had a value of about $1,500 on their own, so the new buyer got a great deal. You can see the site today at ReusableBagStore.com.

It’s Not All Bad

Okay. If you look at the financials, it is all bad. But there are silver linings everywhere in life, and this experience was chock full of them.

We learned that people selling websites online may be fraudsters looking to make a quick buck, so always vet and understand every detail about what you are buying. Unless you are starting from scratch, question every traffic, revenue, and cost before you buy.

We learned that setting up an ecommerce store is easy, but selling products to people is much harder. We have used this in our own sites as we have developed products like my personal finance ebook and flash mob planning workbook.

We learned that when you see a major cost that you can stop, you should stop it as soon as possible. We could have moved off of BigCommerce month one, but delayed because we were not certain of the outcome. That delay cost us hundreds of dollars.

We learned that competition is very important, and when you can buy something for a buck somewhere you go every day, you probably won’t buy it online. Reusable bags are a tough market to compete in when you are going head-to-head with Amazon, Kroger, Safeway, and Trader Joe’s.

Most importantly, we learned lessons for next time. This is not my first business failure, and certainly won’t be my last. But I do have businesses that are successful. I brought in about $30,000 in online revenue in 2014, and 2015 is shaping up to be another great year. Who knows what the next project will be, and how much money I will make, or lose, when I try it out.

I could have bought a plane ticket to almost anywhere in America for the $500 I lost on this store, so it is a bit discouraging, but I will keep on looking forward for the next opportunity. Are you waiting to try your next business too? Share what is holding you back in the comments.